Mogwai are a rock band from Glasgow, and they can sometimes make some pretty beautiful music. Sometimes it's barely there, no more than a distant hum creeping out of the speakers, a delicate melody suspended in the air. And sometimes it's ferocious, brutal and crushing, with volume and tone that you can physically feel. And very often these two sonic extremes occur within the same 'song'. It would be wrong to suggest that Mogwai write 'songs', as their music is devoid of verse and chorus, and the amount of tracks they've written with lyrics over their fifteen years can be counted on one hand. Stuart Braithwaite- former skateboarder, guitar player and writer of Mogwai's music thinks "lyrics are a real comfort to people. They like to sing along and when they can't do that with us they get a bit annoyed".
It's never been clear whether Mogwai set out to annoy people, although producing 'Blur are shite" t-shirts at the height of Britpop, naming an album after a notorious Glasgow gang (Come On Die Young) and dressing head-to-toe in Kappa ned-wear tracksuits did little to endear them to the mainstream.
Despite refusing to play by standard industry rules, Mogwai have been releasing stunning records for fifteen years now and their new album, 'Hardcore Will Never Die, But You Will' should be out right about now on their own Rock Action label in Europe, and on Sub Pop in the US.
You'll know of the cute, fluffy little guy in the Gremlins films that turned into a deranged, vicious killer. Whether deliberate or not, it makes for a good comparison to the band's music. 'Mogwai' translates as 'evil spirit' in Cantonese- which also seems entirely appropriate.
We spoke to Stuart while he was stranded in a snowbound Swedish airport, but words can do very little justice to hearing- or witnessing live- the power and intensity of Mogwai's music. Do your own research, and fall in love with them.


When were you skating the most?

Probably the late 80s and early 90s. I've skated since then but that's when I would skate from when I got up to when I went to sleep. I used to skateboard on tour quite a lot.
Why the move from Matador to Sub Pop in the US?

We'd blagged all the Pavement records and thought we could do with some Mudhoney!
Can you describe the new album? Are there lyrics?
Only one song has lyrics. It's mostly instrumental and is pretty varied. There are quite a few songs that are relatively fast for us.
What are you listening to at the moment/albums of the year?
I love 'King Knight', the Salem record (see last month's BMW for more info) and the Oneohtrix Point Never album 'Returnal' (cinematic synth retro-ism from Boston). There's been a load of great records released this year. It's been a good year for music. 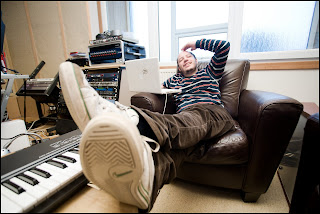 Mogwai are justifiably known for their live shows. What's the best live show you've ever seen?

I saw The Cramps at a festival in Spain soon after we started and it was the best show I've ever seen. They were outrageously good!
I bet you're delighted that all the Britpop bands are reforming.

I like Pulp actually so I'm pretty into that one.
Mogwai always get compared to Slint. What do you think about that?
I think we were one of the first bands to really name-check Slint so I think there is an element of laziness. I can think of worse bands to compared to though to be fair!
What was it like working with Roky Erickson, leader of the seminal 13th Floor Elevators?
It was awesome. He's a lovely guy and one of my all time musical heroes. It was an honour.
Is there a track or an album you're especially pleased with?

I think our second album C.O.D.Y. is our best. I'm proud of a lot of our records but that one stands out for me.
What's in the pipeline for Mogwai and Rock Action in 2011?
Mogwai will be on tour for most of the year and the label will be busy too I'm sure. I'm looking forward to the second Remember Remember (groovy, psychedlic, pastoral Glaswegian post-rock) album getting done.
I seem to remember you being sponsored by adidas. How did that come about?
We've never been actually sponsored by anyone but we have a good friend at adidas who gives us shoes and another friend of ours used to give us Kappa stuff too. I had an awesome Juventus bathrobe!!
Posted by Neil Macdonald at 08:24