Norwegian denim n' leather glam punk legends Turbonegro recently reformed, after a brief spell in limbo, with new singer - Englishman Tony Sylvester - following the departure of frontman Hank Von Helvete after his 21 years in the band. Tony fits in just perfectly, and he's a really cool guy too, so I spoke to him about hardcore, Kiss, Hank and what it's like being the new guy... 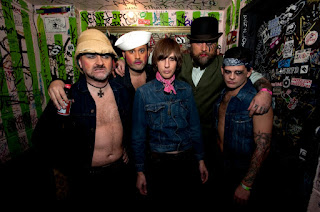 Turbonegro, with Tony second from right. Photo by Keith Marlowe.

How did you guys get hooked up with Volcom?
Blimey. They've always been involved. Not long after they started making clothes they started the label. Which not a lot of people know. So when they became a huge brand, they always had the record label because that was their passion. That was always what they liked doing. So they put out a couple of 7"s, and sponsored tours, and bits like that. So it's pretty good. And we've got it pretty good. We're label-mates with Wino, Torche, Valientt Thorr... So it's not bad company to be in, and there's no labels left, really. The way we are, we can afford to make out own records and then license them. So we make them ourselves, then go and find the record label afterwards. So we're not in hoc to anyone, which is a very enviable position to be in as a band.

Talking of enviable positions, how did you become part of Turbonegro? Are you the Sid Vicious of the band?
Yes! Simple as that! Haha! No, no... What happened was, I'd been friends with them for years - I saw the band before they split up the first time, at the one show they did in the UK - and I'd been a fan for a couple of years before that. When they came back, they kind of based themselves in London for quite a bit, and everyone kind of introduced them to me, because I was the guy who'd been banging on about this band for ages, and we became friends and I ended up doing press on the next record, which was Party Animals. Then they went on hiatus, and I actually asked Tom to join a band I was doing at the time called 33, I asked if he wanted to play bass on that.


Was that your plan? Get the bassist for your band?
No, no. I knew he was at a loose end. But then, I guess after a couple of years, I ended up going to Oslo for a weekend and it coincided with them thinking about getting back together, so the whole thing meshed together rather strangely, and here we are.

How much did your enthusiasm for the band lead to the reformation, new album and tour?
Definitely not the reformation, because that was them, but a lot of it was down to people's reactions. If that first show hadn't gone as well as it did then - we wouldn't have stopped - but we'd have taken it a lot slower. We would have gone and played more shows and eased into it.

Were you shitting yourself, personally?
Yeah, of course. I mean, they don't like to rehearse. We did two rehearsals and then went into that show.

Did you have to rehearse much? Did you know all the songs?
There's a real difference between singing along with a band, and being the actual one doing the singing. I knew the songs as in, I could sing along with the songs. Some are easier than others!


You're into your hardcore music. What do you think of the state of hardcore music today?
It's funny, there's a lot of new bands coming through that I really actually like again. The great thing about hardcore is that its conservatism is actually one of its strong points. What happens, is that everything goes off the boil and people try to make it really progressive for a while and you get some horrible things happening - like Refused - and then it kind of bangs back to what it was. Like someone comes out who's 'old sounding', and it kicks back in. There's not many genres that are like that. Black metal's kind of the same. That band Ceremony, I really like what they're doing. They're progressive in that they're regressive, if you know what I mean. I love Fucked Up. Fucked Up have a really nice take on it.

It's maybe the wrong question to ask somebody in Turbonegro, but do you not think Fucked Up's aesthetic is greater than what they actually do?
You need to go and see them. I like his voice, I like his presence. The problem with having that much schtick, is that you're going to be beaten with that schtick. If he goes on stage and doesn't strip off and cut his head open people are going to be disappointed. But under that, it's a really good band. And that's the difference between them and some other bands.

Has Turbonegro's image ever been in danger of becoming bigger than what the band are?
It's funny. You have to consider the history of the band. I mean, they were a band coming out of 'authentic' hardcore, where you can't be artificial; and the grunge thing that was going on, which was deliberately contrived, with the dressing down and the "I'm not going to be a rock star" thing. So for them to be coming out and be playing squats, but with a full pyrotechnic show and make up and guitar solos; that was what appealed to me about it when I first heard them, probably in '97. I was listening to a lot of very worthy post-rock bands, who were all wearing brown and screening their own sleeves. Just this sexless, intellectual, joyless wank. They really reinvigorated my love for caveman, dunder-headed, down-stroke riff, old hardcore. Ironically they actually became a stadium band. Rather being a tiny band pretending to be a stadium band. So this time round it's the inverse, we're a big band pretending that we're a small band. We made a conscious effort to get rid of a lot of the gimmicks. We'll probably do it again though.


It's pretty cool that this band exist, and they've got all these great songs, then you turn up and get to sing them.
Any band I've ever been in before, I've never felt like I've owed an audience anything, or that I've needed to perform anything.

You do now.
Exactly. That's the difference. Any band I've been in, we were never a draw, therefore I never felt the responsibility to actually entertain anybody. Now I'm in the position where I'm like the MC of somebody's night. If I'm good or bad it'll affect somebody's night, and somebody's put money into that. It's more of a responsibility than I've ever had before so therefore I take it a lot more seriously than I ever have before. Working on the voice, working on the actual mechanics of it. Singing's a very physical act, and it's not easy to do it several nights in a row.

Are you struggling?
I wouldn't say I was struggling, but I've had to put in the work. When you're in hardcore bands you're doing twenty minute sets, and now I'm doing hour-and-a-half sets. But we got there.

After the last time I saw Turbonegro, my wife and I had a massive argument and she moved back to Australia. Can you explain this? I'm holding the band responsible.
I think that's fine. I think we've probably put together as many people as we've broken up. How's that?

It means fuck all to me.
Hahahaha! But you've got to look at the big picture. You only see it from your point of view!


What are the best and worst bands you've played with?
You get mismatched at festivals in Europe. We play higher on the bill in mainland Europe than we do here, and we've found ourselves north of the Arctic Circle with the other headliners being the Pet Shop Boys and Shaggy. Shaggy... That motherfucker can put on a show. Dude, that was fucking incredible. Probably one of the worst bands we've played with was this summer, with Kiss. Appalling. It actually made me angry, like "Is this good enough?" They got paid - to play this festival - like seven figures, and they've got all the make up, and they've got all the pyrotechnics, and they've got all the video screens, and they just can't play. It's sloppy, borderline school-band. It's terrible. They've realised what people want - the spectacle - and they haven't put the work in. They played 'Crazy Nights', which really relies on the vocal harmonies in the middle, and it's just these old men bellowing at you. Absolute crooks.

Do you want to talk about Hank becoming a Scientologist and making bad dance music with Marilyn Manson's band?
I don't know what to say about that. They've been really gracious in that I've been kept out of all that completely. The only reason it got shitty of late is that there was the feeling that Hank was trying to fold-in the Turbonegro name, and the Turbojugend, into Scientology. Tom got pretty upset about that. But in all the recent interviews Hank was "I'm not doing Turbo anymore, I had to kill the character" so I never felt I was treading on anybody's toes because he'd made it so clear he didn't want to do it. But I was always a fan of Hank. Because I was a fan of the band. I didn't have to put up with what they did. I'm dandy! Hahaha!


More info about Volcom at their own site.
Posted by Neil Macdonald at 14:43