The longest-standing band on the Volcom roster, Valient Thorr have been making insane, raw, outer-galactic rock n' roll for the label since 2004. As the recording of their fifth album (and preparations for a global tour) get underway, I spoke to leader and vocalist Valient Himself... 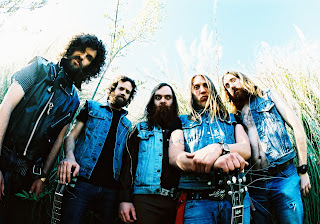 Who are Valient Thorr?
We are. You can either look at is as five dudes who came here from the planet Venus and ended up playing rock and roll to spread messages of peace and tolerance to a war torn planet Earth, OR you can say we are thousands of like minded people who understand what it means to be humanitarians, judge not, mind our own business when it comes to 'wedge' issues, help others always not matter what, and spread posi vibes the world over.

What is Valient Thorr?

A collection of stories that we are actively living, hopefully leading up to the eventual salvation of most of the human race through fast music that tries to inspire others to exfoliate the bad and soak in the good times.

You had a big summer of touring. Where did you get to? Did you see anybody cool?
We did US and Europe. Saw a lot of rad stuff.  Some of my favorite things was seeing Sean Kuti and Egypt 80 at Jazzfest in New Orleans, Ivan Neville and Dumpstaphunk at Bonnaroo in Tennessee, The Obsessed, Sleep, Danava and Voivod at Roadburn in Tilburg Netherlands, and Orange Goblin were great at Desertfest in London. So many shows, buddies, and crazy times, its really hard to remember it all. You have to sit back and think really hard.
Who's the best band you've played with?
That's too tough of a question. We've played with so many good bands. Known and unknown. I guess out of the known bands, some of the best were Motörhead, Gogol Bordello, Mastodon and The Stooges. I think the best bands I've ever seen were Iron Maiden, Judas Priest, Melvins, and Sean Kuti.
You're from Chapel Hill. There's a load of bands from Chapel Hill - who do you like from there, and who lets the place down?
I think my favorites from the old days are Archers of Loaf and Polvo. I think some new bands to check out are Caltrop, T0w3rs, Black Skies and Colossus. I wouldn't pay attention to any that let you down. Raleigh is where a lot of us stay now too. We are spread out all over NC. Demon Eye, Birds of Avalon, Thunderlip, Salvacion, Mountain Thrower, The Dynamite Brothers, 2013 Wolves, Crusades and Bitter Resolve are other great NC bands at the moment off the top of my head.

How did you get together with Volcom, and how did the split with High on Fire come about?
We met Volcom reps and company dudes way back in 2003 after completing our first album ourselves. We played a show with then recently signed band ASG in Wilmington, and they asked us to do couple things, then asked us to put out a record with them in '04. Then we quit our jobs and lived on the road the next three years solid. Over the years we've made countless buds. Volcom has a seven inch vinyl club and puts out twelve splits a year. We did one with HR from Bad Brains a few years back and then when this came up, we've known Jeff since he played bass with Zeke, and we've known Matt from a good number of years now. The suggestion to do something like that was made two years before it happened when we were out with Mastodon. Some times it takes a while for things to come to fruition.


What are your three favourite movies made between 1980 and 1985?
That's way too hard. But - If pressured, I'd say, number three Mad Max, number two River's Edge and number one, Big Trouble in Little China.

What's the best album artwork you've ever seen?
Not afraid to ask the tough ones, huh? I don't know about favorite, but I've always loved D.I. - Horse Bites Dog Cries. My brain hurts too much to think of others.
What's the most injured you've seen somebody get at one of your shows?

Hmmm. I've seen a few chicks get clocked by Nitewolf's bass. I've been knocked by guitars pretty bad before. The weirdest worst one I guess was when we were in France at the end of a tour in like '08, the music stops and all of a sudden I saw this kid come flying down to the floor from the upper balcony. Like almost on my head, just missed the stage. I immediately started laughing, then decided we better check if he was OK. It was just so unexpected, I couldn't stop laughing. He ended up being OK. 99% of the time, people are cool to each other at our shows. I usually try to intervene quickly to squash quabbles and try not to interrupt the show.


Mark Mothersbaugh does kids TV music. Can you see yourself doing that in the future?
I would love to. Even more than that, I would love to do voiceovers for cartoons. I'm actively pursuing a voiceover career. So anyone out there working production... I'm available.


Do you guys skate much?
I just cruise on a mini board, but Nitewolf rips and Eidan Thorr is still known to get down from time to time as well.


Are you annoyed or flattered that Chris Haslam stole your hair, your beard and your clothes?
Hahaha! I don't think it was like that. I know Chris, he digs the band, we're buds. I'm pretty sure it was a coincidence. He's said he gets people yelling "Valient" to him, and when I skate around town in Costa Mesa, I've heard people yelling "Haslam" as I'm cruising by.


Steve Albini or Bon Scott?
Bon Scott. I mean, I like a couple Shellac songs, and he's a pretty good producer, but Bon Scott is Bon Scott!


What are your next plans? Are you coming back to the UK any time soon? It must be about time for another album...
I can't tell you anything except we are holed up working. You know us, we'll be back soon.
Find out everything else at the Volcom Entertainment website.
Posted by Neil Macdonald at 14:38